“We pray that Christ may dwell in our hearts through faith and being rooted and grounded in love; all may be filled with all the fullness of God.” (Ephesians 3: verses 17-19). Our prayer is that St Mary Stelling will be a living beacon for the worship of Christ in our local community.

St Mary Stelling is a small but active and historically important rural church, situated in Church Lane, Stelling Minnis, Canterbury, Kent CT4 5PT. It is part of the Diocese of Canterbury within the Church of England.


As a Living Church, and as a demonstration of our faith, we have supported local and global mission agencies both financially and through prayer. During the year, our main focus was on supporting three Charities: a) Release, which serves the persecuted church around the world in five key ways: showing God’s compassion, serving God’s church, sharing God’s love, spreading God’s word, and speaking as God’s advocate. www.releaseinternational.org b) Catching Lives (formerly The Scrine Foundation) who primarily support and provide shelter for homeless people locally. www.catchinglives.org c) Childrens Society donated from Christingle service.

The Diocese of Canterbury

Coronavirus (COVID-19) guidance for churches | The Church of England

All walks have ceased.

St Mary Stelling dates from the 13th Century, although a church on this site is noted in the Doomsday Book, and the date of consecration of Stelling Church is reputed to be 1130. The church started its life as an outlying chapel, firstly to the basilica at Lyminge, and after the Norman invasion to nearby Hardres. In 1988 The Conservation Foundation, of which Professor David Bellamy is a member, aged one of the yew trees in the churchyard as 1,500 years old; the implication of this, together with the proximity of St Marys to the Roman road linking Canterbury to the port of Lympne, is that this was an early Christian site dating from the Roman occupation.

St Marys is, on the face of it, a typical east Kent rural church, constructed in flint with stone quoins, and comprising a nave, chancel, south aisle, south porch and tower. It seats approximately 120 people and weekly services are held. The church, however, is unique and of exceptional importance. Indeed, St Mary Stelling is listed in Simon Jenkins’ authoritative book ‘’England’s Thousand Best Churches’’. In the 1790s it was re-ordered in a non-conformist style. This involved placing the pulpit midway along the north wall of the nave (opposite the south aisle), and re-arranging the box pews. Indeed, the Kent Archaeological Society, which is one of the oldest and most respected local historical societies, in referring to the layout of the pews reported that “No-one in the large Kent Archaeological Society had seen anything similar in an Anglican church”. 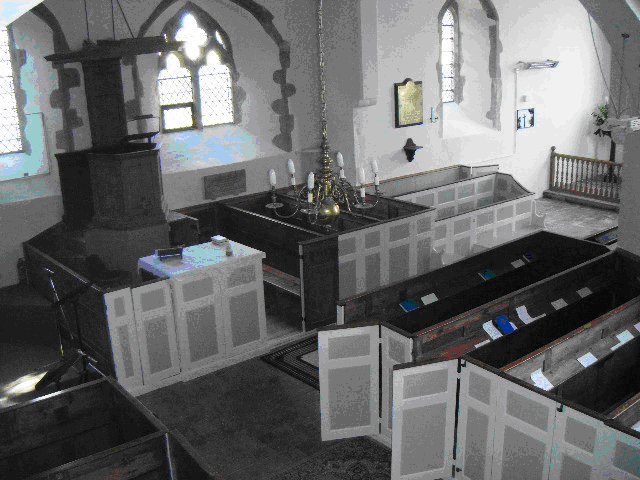 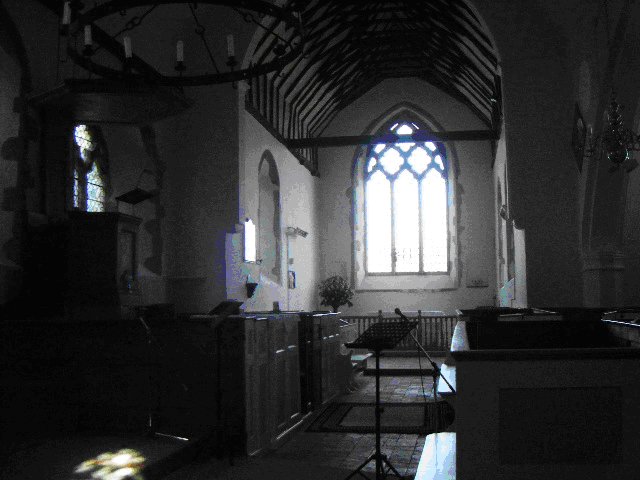 The pulpit itself is a three-decker pulpit with a sounding board, which is understood to be unique in an Anglican church in east . At the same time a music gallery was installed above the south aisle facing the pulpit, and to provide a view of the pulpit the south arcade was removed and replaced by a single large arch. The work included the re-building of the tower (the north wall was totally refaced in brick courses and knapped flint with galleting; the south face was given a tile hanging). A new brick south porch was also constructed. The north doorway was bricked up and a vestry was created at the west end of the south aisle (later to receive a fireplace and flue in its north-east corner). Importantly, this re-ordering was not subsequently altered by 19th century restorers, and we have today a unique non-conformist modification of a medieval church.

After the Civil War, non-conformism in this area became rife. It is quite remarkable that this non-conformism should succeed in invading the established church of St Mary. These changes reflected a strong non-conformist element in the local community, which can also be illustrated by the fact that three Methodist Chapels were built within a mile of the church during the next hundred years. The church is an outstanding historical record for all to see of social and religious developments in this corner of .

A further unusual feature of St Marys was revealed in 1999 when the nave ceiling was removed following damage. The roof construction was found to be based on King posts and not Crown posts as is the norm for churches of this age and style in this area. The Canterbury Archaeological Trust examined and recorded the structure before the ceiling was replaced, and although there is little to be seen to indicate its unusual character, the knowledge of this roof construction adds yet more interest to the building and its history.

The three bells at St Marys are all medieval. The treble bell weighs 3.5 cwt and is probably early 14th century. The second bell weighs 5cwt and is inscribed with the words ‘’Vox Augustini sonet in aure Dei’’ (The voice of Augustine sounds in the ear of God). The tenor bell weighs 7cwt and is inscribed with the words ‘’Santa Katerina ora pro robis’’ (St Katherine prays for us all). These last two bells were made by John Walgrave of in the early part of the 15th century. The bells are still rung today but are unheard by many of the parishioners as the church stands away from most of the population. The reason for this is unclear although it is thought that much of the village perished during the period of the Black Death, and following this time the settlement moved to the Minnis. The bells were swing chimed until the 1980’s when the Ellacombe apparatus was installed. The bell-frame was repaired in 2008.

In 1790, at the time of the re-ordering, the Vicar of Wye, the Reverend Philip Parsons, visited St Mary Stelling, and in his book, “The Monuments and Painted Glass of 100 Churches’’, tells of the beautiful stained glass in the church. In particular he describes in detail the 14th century window in the south aisle. It is not clear where the wealth came from to endow the church with such magnificent glass, but within a few years this window was to be removed to and St Pauls Church at where it remains to this day, with the exception of the centre light which is now in Stowting church. The Reverend Parsons tells us that in other parts of the church there was much painted glass but within a short period of time all this was changed. We do not know what happened to this glass. Could it have found its way to the Cathedral as some other glass in the neighbourhood did? This remains part of the history and mystery of this very special church.

St Mary Stelling was closed for the repairs from July 1792 to March 1793. The restoration of the church was done at the expense of Mrs Elizabeth Denwood, widow of the Revd. Thomas Denwood, and one of the heiresses of the Hardres estate when the last member of the family died. She had already built the village school in 1784 and now proceeded to restore the church. These events are recorded on a painted board hanging in the church. This tablet, inscribed by her niece, Catherine Chesshyre, include the words ‘’Reader let her deeds speak her praise.’’

Although knowledge of the whereabouts of the stained glass is limited, we do have information about two other treasures, notably the Elizabethan silver chalice dated 1562 and a silver William and Mary flagon dated 1701. These are now on view in the Treasury in Canterbury Cathedral.

The boundary of the churchyard is marked by hedges and flint walls. In 1799 Hasted commented on the’’ three fine yew trees, of remarkable size’’, but unfortunately the one to the south of the tower was blown down in the great storm of October 1987. This same storm caused significant damage to the roof tiles. The churchyard and its annex contain some fine old tombstones and it is not uncommon to find people from far and wide researching family history. A significant amount of research has taken place and it appears that the great-great-great grandfather of Sir Edward Elgar, who was a yeoman farmer and shop-keeper in Stelling Minnis, was buried in the churchyard in 1764.

In 2007 the church launched a major appeal to raise funds for some essential repairs. The latest building inspection had revealed that the wooden joists supporting both the floor and the box pews which were built directly on to the clay beneath were slowly rotting away. In addition to this the electrical wiring was in desperate need of up-dating and significant repairs to the fabric of the building were needed. Following considerable fund raising and the generosity of local residents and grant bodies, sufficient funds were available to commence the work in May 2008. The pews were carefully removed, section by section. A concrete base overlaid with waterproof membranes was laid to support new timber joists, to which a new pine floor was fixed. The box pews were then lovingly replaced.

The extensive work was closely overseen by the Canterbury Archaeological Society. Close examinations of the sub-soil revealed the possible presence of a burial vault beneath the south aisle and evidence of at least four individual graves adjacent to the pulpit was found. Foundations of a former wall in line with the north wall of the chancel and parallel with the existing north wall of the church were also revealed. Accurate records and photographical evidence were collected by the Archaeological Society, but these only pose more questions and add to the mystery which surrounds this unique church.

However, the church is not just a monument to the past. Today St Mary Stelling is a living, active church with an all-age congregation and is the spiritual home to many. Services are held every week under the leadership of a non-stipendiary priest and lay involvement is significant. The church welcomes visitors at any time and an inspection of comments written in the visitors’ book suggests that both local people and travellers from afar recognise the presence of God in this very special place.

St Mary Stelling holds weekly services for worship and has a good number of adults and children attending regularly. Through the centuries, it has always been here as a focal point not only for Christian worship but also as the centre of our local community, and villagers have been baptised, married and buried here, and this ministry continues to be offered today to the whole community.

St Mary Stelling, together with St Peter & ’s , form a parish of about 1,000 people. Priest in Charge during the vacancy -  Rev Louise Vincer

Making a Donation to the Church funds

In order to make a regular donation to St Mary’s Stelling, the link to the Canterbury Diocese Gift Aid Declaration and Standing Order form is: https://www.canterburydiocese.org/media/forms/giftaid/giftaiddeclarationwstandingorder.pdf

The contents of this page is not the direct responsibility of Stelling Minnis Parish Council; it is provided as a community service.

Page designed by St. Mary's Stelling and  produced for them by Nick Smith  - 16th October 2003